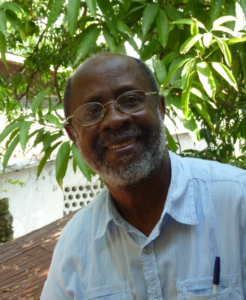 I lost a dear friend, but it was inspiring to share my grief with over 2000 people, more than 85 priests and a bishop who came to participate in the funeral Mass of Rev. Pere Joachim Roboam Anantua, more affectionately known as “Fr. Tijwa”.  The three-hour service took place at Sacre Coeur Church in Cap-Haitian on Saturday, February 23rd.  The church was packed, with many more standing at the doors.

Born on November 29, 1944, Fr. Tijwa died on February 7, 2019 at the age of 74.  He had lived for many years with diabetes and had come close to death many times when his blood sugar dropped at night.  Marie, his devoted caretaker, woke him up in the middle of each night, giving him something to eat to avoid those drops.  We are grateful to her for enabling us to be blessed by his friendship for so long.

Pere Antoine Alphonse told us in his homily that Fr. Tijwa treated everyone the same, whether rich or poor, young or old, friend or stranger.  He touched the lives of thousands of people in the parishes of St. Suzanne, Grande Riviere du Nord and Milot, and in the many places he visited.  Pere Alphonse told us that Fr. Tijwa helped the Parish Twinning Program of the Americas immensely, having visited 35 states in the U.S. as he traveled with priests visiting their sister parishes and interpreted for them.

Near the end of the service Fr. Tijwa’s brother, Jules, expressed the family’s gratitude to the countless people, groups and organizations that had contacted them, most of whom had come to say farewell to a holy priest who had touched them deeply.  Even Jean Bertrand Aristide had called to offer his condolences.  Jules mentioned that Fr. Tijwa had long been devoted to St. Joseph Worker Foundation, helping us reach out those in need, the Haitian people he loved.

After the service numerous students, families and friends I have met over the years shared the deep loss they felt.  They spoke of how Fr. Tijwa had listened to them, counseled and encouraged them, how he had been a father to them.  Fr. Tijwa liked to say that his name meant “little joy”.  It was most appropriate for a gracious, loving man who had a gift for bringing joy to everyone, making them feel special.  He’s surely smiling on us now from heaven, continuing to inspire us to follow his example, to be kind and to share joy with everyone we meet. 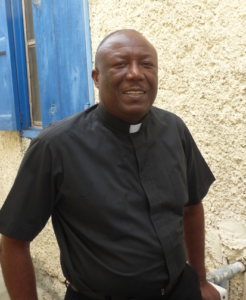 It was a new experience for me to visit Haiti without Fr. Tijwa there.  Since my first trip 35 years ago I’ve always counted on him for a place to stay, for an interpreter, for someone to share his deep love for Haiti and her people.  Fr. Tijwa, who had long suffered with diabetes, nearly dying numerous times when his blood sugar dropped, died suddenly on February 7th.  “Suddenly” because we were still not prepared.  We thought that he would always pull through.  This time he did not.

We gave Fr. Tijwa a tremendous sendoff at his funeral.  Thousands of people came, with sadness and joy, to celebrate his life and remember how he had touched our lives.   We said our farewell, and now we’re on our own.  He’ll always be with us in spirit, but we’re left to go on without him.

There’s really no way to replace him.  No one could every take the place of such a loving, caring, joyful person.   While we could never find another Fr. Tijwa, we did find someone who wants to help St. Joseph Worker Foundation continue our ministry to the poor of Haiti.  His name if Fr. Michelin Pierre, another Haitian priest who loves his people and his country.

I’ve known Fr. Michelin for many years.  He’s the pastor of the Cathedral Parish of the Archdiocese of Cap-Haitian.  He’s a busy man with many interests and responsibilities, but he readily agreed to be involved in our efforts to help the poor of Haiti help themselves.  He can certainly distribute the money we send for the students we’re sponsoring so they can get a good education, but he can also encourage and challenge those who have finished school to find ways to support themselves.

Fr. Michelin is an entrepreneur who has his own garden and livestock.  He is proud that he provides food from his garden for the Cathedral rectory and for his mother.  He knows life in Haiti is difficult, but he has no patience with those who make little effort to help themselves.  He prefers to challenge them to make something of their lives.  He has already met with some of our former students who are still looking for work.  We’re confident that Fr. Michelin will be a great catalyst for them.  We hope he’ll be able to guide them in using their education and talents in creative ways to provide for themselves, their families and their community.

With sadness we say farewell to Fr. Tijwa, but at the same time we’re happy to extend a warm welcome to Fr. Michelin.  Fr. Tijwa, may you enjoy eternal happiness and peace in heaven!  And Fr. Michelin, may God bless you abundantly in your ministry to the people of Haiti!

Thank you for visiting

St. Joseph The Worker is committed to the people of Haiti.  You can assist with the personal and educational development of individuals and groups in Haiti.  The Foundation also provides care and relief for Haiti's medically ill and impoverished. Please consider a donation using the PayPal link below.